Landen Brassard Is Your Strathmore Motor Products King Of The Week

This week's Strathmore Motor Products King of the Week is goalie Landen Brassard.

At 20 years old this is Landen’s third season with the Wheatland Kings, trying out for the team was an easy decision for Brassard, “I used to go to the games when I was a kid I always went there on weekends. I just thought I'd give it a try and it worked out pretty well.”

Goalies can act as the last line of defence for the team and often feel a very different kind of pressure. Brassard embraces that pressure, “It's nice to know that you have the game in your hands like you can wager what the game is going to be like you have full control.”

The Wheatland Kings as a whole are a team that gives back to the community where they can, helping out at different events and holding food drives during the course of the season. Along with that the team sees the younger fans in the stands and looks for ways to interact with them when they can.

As a goalie, Brassard says the advice he would give to a younger player just starting out may sound hard but it is the key to success in the net, “It's all about mindset, it's a very mental position. So work to have your mind in a good place and when you keep it there you can do really well in the position.”

Brassard is grateful to have the support of the team behind him on the ice, he explained goalie for some players could be a very lonely position but he is lucky that no matter what the team will always have his back.

All hockey players feel pressure but Brassard explains that goalies feel it a little differently, “With other players, it can be more physical and for goalies, it is definitely more mental, you are relied on for everything and are usually blamed for the goal,” he chuckled.

Having the team count on him in clutch situations and showing him support in every situation is what drives Brassard to keep working hard and continue to grow.

He feels the team this year has come a long way in a short time but as always there is still room to get better, make the plays cleaner. The main strength he sees from his viewpoint is the team getting stronger on the power play, with the team continually working on consistency during each game. For himself, Brassard said he has been focusing this season on getting more comfortable out of the net and coming out and playing the puck

When it comes to fans in the stands and in the community Brassard said with everywhere he has had the chance to play the fans in Strathmore are the best and having that support at the games makes a big difference to the team, “It gets us way riled up a lot faster, gets us back into the game quicker and everything like that.”

Coming up to the holidays means time off the ice, but Brassard still wants to contribute in other ways “I’m hoping to get a little more into the community here and do some more stuff with the people in the community that always come out to support us.”

Head to the rink for the next 2 Kings home games this Saturday, November 11th at 8 pm against the Mountainview Colts, and next Sunday, November 19th against the High River Flyers game time 4:15 pm, where the team will be collecting food donations for the Wheatland County Food Bank. 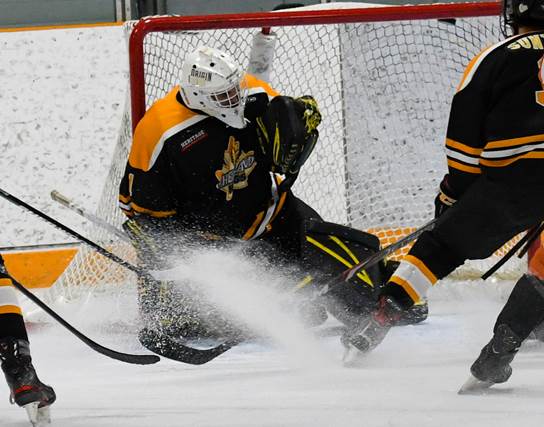 Community A Buzz Over Television Series